Speciality gourmet herbs and spices for the home user. 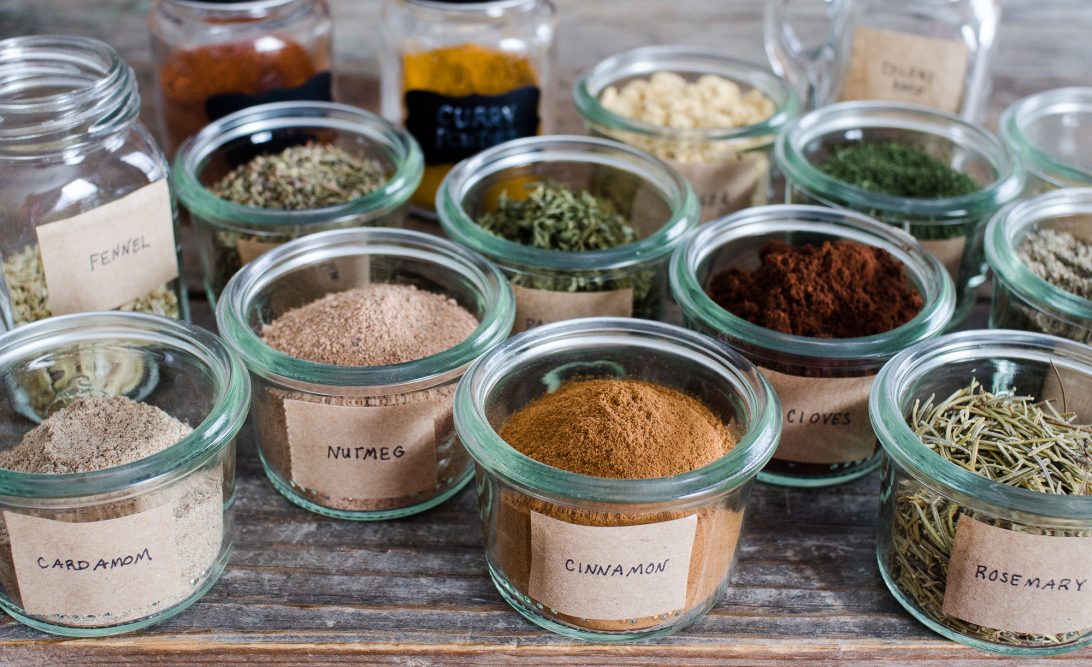 Ever wondered what the best essential spices and herbs are for you to have in your kitchen, or pantry?

We decided to put together a simple list for you.

Whether you are just starting out in your first kitchen, or you want to become more adventurous in your cooking, this list will help you set up your kitchen.

2 – Salt. We believe that by keeping Kosher salt in your kitchen you provide a variety of cooking options. Kosher salt is a 100% natural salt and does not contain any additives or anti caking agents. This means it doesn’t impart the bitter taste that comes with using salt with iodine added, Kosher salt dissolves easily and is a great tasting salt. Can be used in cooking or as a gourmet table salt.

The rest are in alphabetical order…

3 – Bay Leaves.  These are typically used to flavour soups and stews but don’t forget to remove them from the dish before serving. Whilst bay leaves are usually used dried, look for those with a greener colour as they are fresher. Also be careful not to overdo it. Try one bay leaf at a time and then taste the dish. Of course, when you are cooking you should always be tasting the dish. You should always be cooking by flavour rather than cooking by ritual or recipe. Too many bay leaves in at once may leave your dish tasting a little bitter. You should also be prepared to remove the bay leaves during the cooking process. You don’t have to leave them in until the end.

4 – Cayenne Pepper.  This spice is usually used to flavour in Indian and Cajun dishes. It is made from cayenne peppers, a small tapered red chilli of the capsicum family. Cayenne pepper is made ONLY from cayenne pepper chillies. Generally it has an average heat rating. Note that some forms of Cayenne powder may contain a variety if chillies and not just cayenne pepper.

5 – Chilli Powder. This is usually used to add spiciness to Asian and American/Mexican dishes. Chilli powder will be a combination of chillies, most usually jalapeno, chipotle and piri piri. Note that Chilli powder blends can also sometimes include other spices like cumin, onion, garlic powder and salt. The chilli powders that we sell on this site do not contain any non chilli products. They are all purely chilli.

6 – Fennel seeds. Dried fennel seeds, usually brown or green in colour, provide a strong aromatic flavour to your cooking. They have an anise flavour. They are an essential ingredient in Chinese Five Spice and used in Asian cooking.

7 – Fenugreek seeds.  Fenugreek seeds have an amazing sweet smell and add a delicious flavour to curries and Asian dishes. You can also sprout the seeds and use them in salads. People with allergens may react to fenugreek.

8 – Ground cinnamon.  This is the same as cinnamon powder. It is used to season and flavour foods but whilst most people use cinnamon for sweet flavoured foods, a pinch of cinnamon in spicy food also adds a great touch. Cinnamon is a very aromatic spice. Be careful using cinnamon powder, it is easy to over do it. Try a little pinch or two at a time and TASTE your dish before adding more. Watch out that you don’t spill it as it can stain household benchtops and implements easily.

9 – Cloves, ground or whole. Cloves are the flower buds of an Indonesian tree which have a strong, aromatic flavour. Used in Asian cooking primarily, they are used in many global dishes like stews and soups as well. For the home cook it is useful to carry both whole cloves and clove powder but again, use sparingly at first until you understand the strength of the clove. Historically cloves have been used for medicinal uses also, and clove oil is effective for tooth ache.

10 –  Cumin ground. Cumin is an aromatic spice used mainly in middle eastern and Indian cooking. It is often an ingredient in curries and some chilli powder blends.

11 – Curry powder. There are an endless variety of “curry” powders, all of which are a blend of many spices. The basics of many curries include turmeric, cumin, ginger and chilli. The term “curry” applies generally to many Indian spice blends, none of which in their native state are called a “curry”. Usually the term curry suggests the dish is cooked in  sauce. In some parts of India “curries” may be flavoured with curry leaves.

13 – Nutmeg. This is a sweet spice often used in sweet dishes although it is also commonly used in Asian savoury dishes to add an extra touch. In European dishes it is common in stews and soups..Nutmeg is made from the seed of the nutmeg plant whereas a spice called Mace is made from the outer covering of the seed. It can also be used in cooking but has a slightly different taste.

14 – Oregano. Oregano is a herb, and in cooking you use the dried leaves of the plant. These are usually more flavoursome when dried. It is aromatic with a slight bitter taste and can numb your tongue. Can be used with meat, fish and vegetables and is also used in some salads.

15 – Paprika. This is a finely ground powder made from capsicum. It is usually sweet in taste but can also be hot. Has a beautifully warm red colour and can be used to garnish foods but is most commonly used to flavour stews.

16 – Red pepper crushed. Let’s get the terminology correct here. There is something called “Crushed Red Bell Peppers” which is red capsicum (bell pepper in some parts of the world) that is dried and then crushed and has the sweeter taste of capsicum. Then there is something called “Crushed Red Pepper” or “Red Pepper Flakes” or “Pizza Pepper”. Each of these is dried and crushed red chilli and will obviously have a hotter taste than Crushed Red Bell Pepper. Confused? Why not buy both. We stock them both here on this website.

17 – Rosemary.  These are the dried leaves of the Rosemary plant  The leaves are aromatic and used as part of stuffing for meat and often used with lamb. You can also use the leaves for making a tea.

18 – Thyme. The leaves are used either dried or fresh. Fresh has stronger flavour but a short shelf life so having dried thyme in your pantry is a great idea. Often used in meat dishes.

All of the above products are available here on our store.